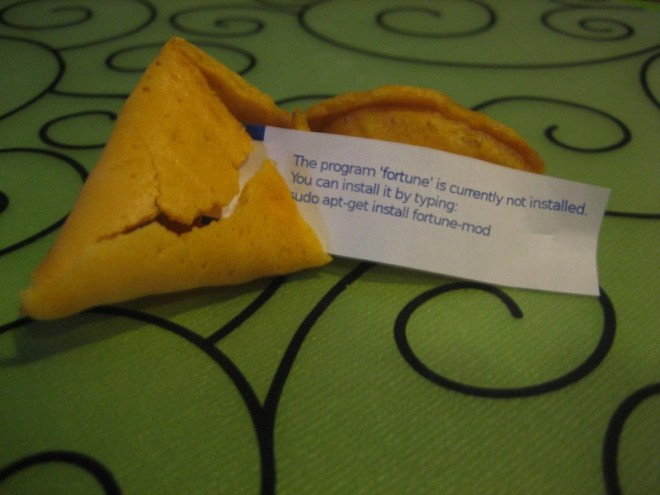 I wrote this up years ago, but with the demise of CrunchBang those bits are rotting away. The URL is still good, but my post is mostly gone. I just installed Debian Stretch on my Mom’s old MacBook and the issue is still there, so here it is again.

If you invoke a command that doesn’t exist, most shells will simply tell you so.

Ubuntu has a utility called command-not-found. If you invoke a command that is not installed, but is available, it will tell you how to install it.

This command is now available in other Debian systems too, including the latest stable: stretch.

But it doesn’t quite work right, as is.

Most programs transition from Debian to Ubuntu. This one transitioned the other way. I guess the trip isn’t as smooth, since this was years ago and it’s still not fixed (indeed, it’s still line 93). I think this affects at least Debian wheezy, jessie, and stretch. It looks like it’s fixed on github and in Ubuntu (checks for either “admin” or “sudo”), but has not been backported to Debian yet.

Last week, while I was at Abstractions, I heard that PowerShell for Linux was released. Today, I tried it out!

My desktop machine at home is currently running Xubuntu 16.04.1, which is one of the platforms already packaged up. I downloaded the .deb, checked its sum

and followed their instructions. I already had the two dependencies, so

had no effect. Installing their deb

gave me a powershell executable.

Okay, how about those regexes with multiple named captures I talked about a while back? If we write this in multicapture.ps1

then lo and behold we get

Now that I don’t have to boot Windows to do it, I might play with PowerShell a lot more! Thanks, Microsoft!

This weekend I installed Debian 9 (stretch) on my little blue netbook. I love it!

It has breathed new life into this tired little soldier. I bought this netbook a little over five years ago because I was sick of lugging around the 15 inch laptop (pictured with it) at conferences and whatnot. I had just gone to a conference with my friend Nate, who had a little netbook with a 10 inch screen, when I spotted this little blue guy for like 250 bones. Sold!

I currently also have a 17 inch laptop (Diana’s old one) with Debian 8 (jessie) installed on it and that’s perhaps the nicest operating system I’ve ever used. Until now. Stretch has several nice improvements over jessie.

First, wifi. Getting wifi working remains a bit of a challenge in Linux. When I installed jessie, I did the whole install from CD. Then I hooked up the ethernet cable to get internet access so that I could enable the non-free repository and install the driver I needed for wifi. Only then could I disconnect the ethernet and use the wifi. When I installed stretch, I started the install from a thumb drive (the netbook has no CD) and it stopped me and said I needed non-free driver rtlwifi/rtl8192cfw.bin for wifi and if I had the removable media with it to insert it now. So I went to another computer and grabbed that file off the internet, wrote it to another thumb drive, inserted that into the netbook, and hit “yes”. Voila! I did the rest of the install with wifi— no ethernet required! This seems like a really nice compromise between Debian not wanting to include non-free software and the rest of us wanting to use our wifi. It’s a win-win!

Third, perl6. On my jessie box, I did the whole rakudobrew thing. In stretch, there’s a recent version of rakudo all packaged up!

Fourth, the printer. In jessie, I had to do a little research to determine that I needed to install system-config-printer and then use it to install my printer. In stretch, this was already there and “Settings -> Print Settings -> Add -> Network Printer” was all it took to discover my wireless printer and to correctly guess and install the driver for it.

During the stretch install, the touchpad of the netbook didn’t work. I was all set to research drivers or something for it, but upon booting the system, the touchpad worked. Still not sure why it didn’t work during the install.

The command-not-found utility still doesn’t work, but just installing it and then changing admin to sudo still fixes it.

I am still tinkering, but I can already tell I’m going to love stretch! I was toying with the idea of getting a fancy new laptop, but now I think I will keep using this little blue netbook for a while longer.